FREE Books With This Article: Coronavirus and Global Power by Jason Carter.

Jason Carter’s books Trumpet Blast Warning and Beyond Earthly Realms, will be FREE on Amazon Kindle for a few days.

It’s not about Trump. He wrote it before he became president of USA!

Author and broadcaster Jason Carter, wrote the following article. You may remember TV and radio broadcasts featuring myself and my good friend and fellow host on Eternal Radio, Jason Carter. I highly recommend his articles.

Please also watch Jason’s below video. It contains extra information, not included in his article here.

Global power lies in the grasp of the few. Their idea is not power for the people, but power for themselves. This is the intrinsic difference between globalism and populism. Globalism shackles the masses while populism (although imperfect) generally attempts to free the individual and uplifts a nation. Perfect government is Jesus coming theocratic rule. 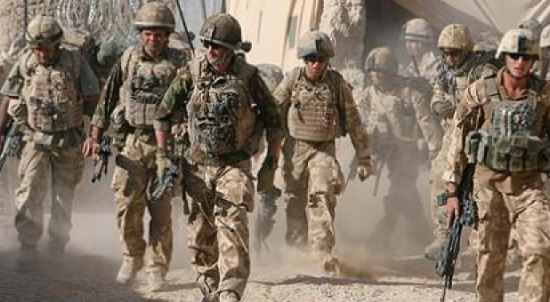 Globalism looks towards a totalitarian world government, the kind prophesied in the bible, ruling the peoples anti-democratically by implementing complex deals and agreements, trade, health, averting so-called global catastrophes, enacting wars and so on. These drive tyrannical global policies into law through fear, giving more power into globalist hands and continued stripping away of sovereignty from nations.

“You never let a serious crisis go to waste. And what I mean by that, it’s an opportunity to do things you think you could not do before.” Rahm Emanuel, former Chief of Staff to Barack Obama.

“We are on the verge of a global transformation. All we need is the right major crisis and the nations will accept the New World Order.” David Rockefeller.

In any other circumstance these new laws would be flatly rejected by the people, but while in a state of panic, instilled and propped up by the mainstream media’s relentless drumming in of whatever the current crises maybe, the people are not in a position to see objectively. 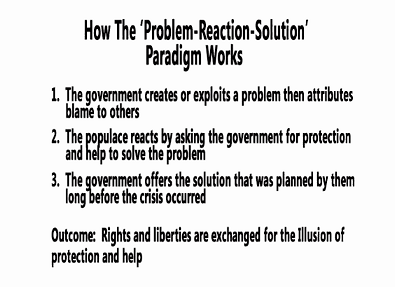 They are bombarded relentlessly with fear stories. They are reduced to individual panicked survival, rather than seeing the true global picture before them.

It is the propagandists best trick in the book, utilised by Hitler and his minister of propaganda – they said ‘relentless repetition’ was the key to getting the people to believe what they wanted. They planned cable TV to get that box into every home. They knew the power television could hold over the masses. Today TV is in every room in the house, in our pockets and worn like jewellery upon our wrists. Repetition is everywhere. Our thoughts are not our own. The propagandists dream has been realised.

The people are panicking and want an end to their media imagined nightmares. There is a power button of course. The information could be stopped in an instant but the user is addicted. In the meantime anything is accepted when fear controls the individual. Notice how many levels of control can be exerted over the entire global community just by fear-mongering over a virus.

Notice how they prioritised the reporting of Coronavirus during Brexit coverage – a historical moment for the UK – programming the masses with what really mattered. Not Brexit, but disease. Not freedom, but fetters. That is how they embed fear. That is how they attempted to disempower Brexit.

This is Antichrist installing tactics at its best. Propaganda has the power to override nations, shut down nations, cripple growing economies, close public gatherings, control church events and even quarantine pastors, enact martial law, take away liberty and freedom. Stop travel. All this is happening and on the whim of a virus that will soon be yesterday’s news. Along with all the other calamities that should have killed us all by now.

Prince Charles spouted doom at the 2009 climate conference – but we are still here. Time to wake up and see crisis events for what they really are. Crisis = fear = more control = totalitarian end.

This is the dystopian future. Like the slow boiling frog that doesn’t realise what’s happening before it is too late. It is a clever way to control the masses, one crises after another, especially when they are losing the information war. They have got to throw a spanner in the works to halt the uprising, to halt the progress, to halt the moving away from a globalist ideology. The brainwashed people are waking up. They don’t want them to see that there’s another way. A liberating and empowering way, where power returns to the people.

Some crisis real, some seized upon and exaggerated, others flat out fake, but all disseminated directly through the mainstream media who should by now be completely untrusted. They are are the enemy of the people. News, dramas, documentaries, Hollywood films, actors, music…all with one single message….globalism, pro the system, anti the family, undermine traditional family and gender, destroy community, and look to government as the only hope.

Confidence in the mainstream news should be at an all time low by now. It is surprising the sway it still holds on the populace – the fake news isn’t where we’ve been told to look, it’s right under our noses, spouted by those who are themselves propagating fake news. Objective balanced journalism does not exist anymore – the news is the mouthpiece for the globalist monopoly. Crises events are used as a means to further their agenda.

I’ll never forget what Rahm Emanuel, the chief advisor under Obama, who I believe is now Mayor of Chicago, once said, (from memory, so maybe not a perfect quote), – “You never let a serious crisis go to waste, and by that I mean you can do things you couldn’t do before.” We have seen this time and time again. Government seizing opportunity to clamp down on its citizens through crisis both real and fake.

Keep our eyes on Jesus, especially during these end times.

Jesus settles the problem. Believers have not a spirit of fear. For those who fear have not been perfected. JESUS peace disables fear, peace therefore disables the globalist programming. Peace takes us into the real world and out of the fabricated media world to think for ourselves. Peace takes us into freedom, out of fear, and free to live our lives the way we want, without it being dictated to by those who only want to control it.

Jesus said, “Peace I leave with you; my peace I give you. I do not give to you as the world gives. Do not let your hearts be troubled and do not be afraid. When the Spirit of truth comes, he will guide you into all truth. He will not speak on his own but will tell you what he has heard. He will tell you about the future. John 14:27; John 16:13

Jesus is the only one we should be listening to, not the mainstream media.

God bless you all.

By Author and broadcaster Jason Carter.

Jason and I discussed this yesterday. I mentioned that we can share the Gospel with as many as possible. Amongst the fear and illness, we can lead many people to Jesus, pray for the sick to be healed and show the love of Jesus by bringing food to our neighbours and so on.

We all will die one day, whether of this virus or something else. It’s crucial people know the Lord and will enter heaven after death. The Lord wants none to perish in hell. Jason agreed with me.

So, don’t panic, instead let’s take the opportunity to keep sharing the truths about Christ and His salvation, while we can!

God bless you all,

You may remember my reviews for my good friend and cohost on Eternal Radio, Jason Carter’s book Trumpet Blast Warning. It’s not about Trump. He wrote it before he became president of USA. You can find a free chapter DOWNLOAD from his book on my blog!

Laura with Jason Carter, holding a copy of each other’s books!

Romans 13 Does Not Tell Us To Submit To Government Regulations That Contravene God’s Laws.

1 Response to FREE Books With This Article: Coronavirus and Global Power by Jason Carter.