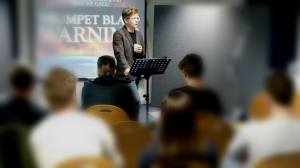 This is very possibly the most important book I ever read! Grand statement? It’s how I feel. Jason Carter sent me a copy of his book TRUMPET BLAST WARNING – An End Time Prophetic Wake Up Call. Please see the end of this article, for a free chapter download!

He also kindly wrote a summary of it especially for this blog. In the book, he quotes from famous occult leaders on their goals of forming the New World Order and uniting all religions under a Luciferian agenda. I remember such teachings from when I was a New Age Spiritualist and I spoke of it on a TV program! Jason also quotes from senior politicians worldwide, on their progress towards the New World Order/One World Government.

Sadly, most Christians don’t know the reality of these plans, or how they clearly point to the end times agenda. I’ve written a review of the book – see link.

If you only buy one book this year, please let it be this one. I’m convinced you won’t regret it!

Through meticulous research and verifiable references, Trumpet Blast Warning by Jason Carter catalogues the startling connection between end-time Bible prophecy and contemporary events unfolding on the world stage. At the same time it also uncovers an undeniable connection between the occult, and the prophetic events that will culminate in a fully-fledged one world system and the rise of the world leader, the Antichrist – the master occultist.

Alarmingly these ancient occultic practices are being engaged in by many of our very own senior politicians, world leaders, bankers and corporate heads around the world today. Trumpet Blast Warning follows the engagement of these practices, of often bizarre ritualistic behaviour, through the existence of secret societies and groups and annual events such as Bohemian Grove.

It also reveals an undeniable link between the occult and globalising political bodies such as the United Nations and the European Union.

Drawing on, amongst other facts, the writings of influential occult leaders such as Alice Bailey, Helena Blavaksky, Aleister Crowley, Albert Pike, Edgar Cayce and many others, and comparing their agenda with end-time bible prophecy, Trumpet Blast Warning reveals the undeniable truth that the occultic spirit of the Antichrist is intensifying all over the earth today.

Jason writes; “When I began my research I did not expect to uncover evidence in todays world regarding the Antichrist’s rise to power as prophesied in the Bible. But as I pored over countless reliable and verifiable documents, film footage, photographs, news items, and read first-hand witness accounts, I was completely stunned!

Anything that was unverifiable I discarded, and I would say at this point, for those who discount my research for mere conspiracy theory, doing this is as ludicrous as joining the Flat Earth Society – the evidence is in plain sight for all to see, should we just simply choose to open our eyes and look.

From my findings I realised that whoever is involved in the occult has unwittingly aligned themselves to the Antichrist and his world system. This revelation struck me on many levels, but one was the need to warn everyone that the globalising communities that are gathering pace through all manner of institutions and political bodies is not as benevolent as it may seem.

On the contrary occultic forces are driving forward an end game strategy to enslave the masses, and to bring to pass all that has been prophesied long ago. “And no wonder! For Satan himself transforms himself into an angel of light. 2 Corinthians 11:14 (NKJV)””

You can buy it from this Amazon Link. 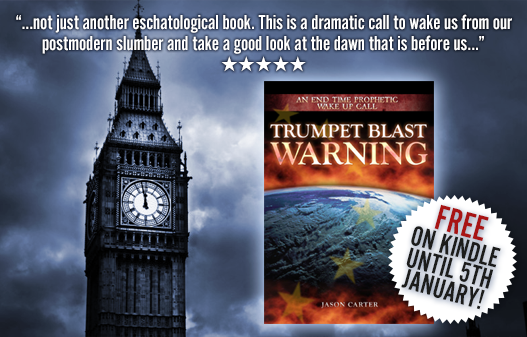