Alex Jones, Joe Biggs and Lee Ann McAdoo discuss the latest news from Wikileaks where it is revealed that John Podesta was invited to a spirit cooking dinner.

The Dark Secrets Of Satanism And Pedophilia Exposed Marina Abramovic and Spirit Cooking.

It reads “Dear Tony, I am so looking forward to the Spirit Cooking dinner at my place. Do you think you will be able to let me know if your brother is joining? All my love, Marina.”

Tony Podesta, regarded as the most powerful lobbyist in Washington DC, is the brother of none other than John Podesta, Chairman of the Hillary Clinton Presidential campaign and counselor to President Obama.

Tony Podesta then forwarded the email to his brother John Podesta (Hillary Clinton’s campaign chairman), asking him, “Are you in NYC Thursday July 9 Marina wants you to come to dinner.”

What is “spirit cooking”?

Spirit cooking refers to “a sacrament in the religion of Thelema which was founded by Aleister Crowley” and involves an occult performance during which menstrual blood, breast milk, urine and sperm are used to create a “painting”.

The video embedded above depicts the bizarre nature of the ceremony. Abramovic mixes together thickly congealed blood as the “recipe” for the “painting,” which is comprised of the words, “With a sharp knife cut deeply into the middle finger of your left hand eat the pain.”

The ceremony is, “meant to symbolize the union between the microcosm, Man, and the macrocosm, the Divine, which is a representation of one of the prime maxims in Hermeticism “As Above, So Below.”

“Abramovic is known for her often-gory art that confronts pain and ritual. Her first performance involved repeatedly, stabbing herself in her hands. The next performance featured her throwing her nails, toenails, and hair into a flaming five-point star — which she eventually jumped inside of, causing her to lose consciousness,” writes Cassandra Fairbanks.

Another image shows Abramovic posing with a bloody goat’s head – a representation of the occult symbol Baphomet.

The revelation that John Podesta, Hillary Clinton’s campaign chairman, is presumably interested in weird, gory occult ceremonies was too juicy for even Wikileaks to ignore.

“The Podestas’ “Spirit Cooking” dinner? It’s not what you think. It’s blood, sperm and breastmilk. But mostly blood,” the organization tweeted. 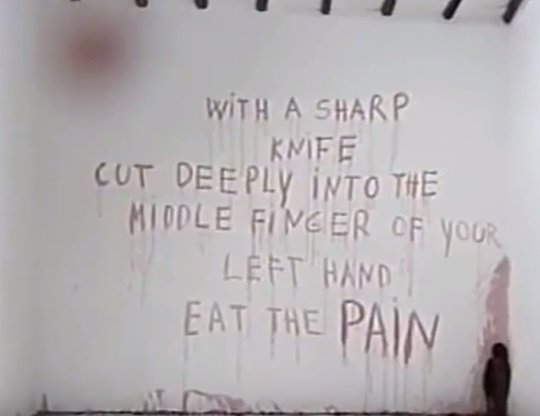 The Podestas’ “Spirit Cooking” dinner?
It’s not what you think.
It’s blood, sperm and breastmilk.
But mostly blood.http://wearechange.org/spirit-cooking-disturbing-podesta-email-yet-warning-graphic-content/ …

Some are even linking the spirit cooking revelation to claims that the Podesta emails contain “code for child sex trafficking” that is hidden behind mentions of types of food.

Others are connecting it to Laura Silsby, the missionary who was jailed for six months after her organization, New Life Children’s Refuge, attempted to smuggle 33 children out of Haiti into the Dominican Republic after the 2010 Haiti earthquake.

While the child trafficking and pedophile connections to Clinton remain unproven, the fact that her campaign chairman is apparently into spooky occult rituals involving menstrual blood and semen is easily one of the most disturbing Wikileaks revelations to date.

PRAYER ALERT! Spirit Cooking the 2016 Election – How to Pray for America! This video reveals the evil connections between the highest levels of the Clinton campaign and witchcraft, the Illuminati and the satanic cult of Aleister Crowley! This teaching video was born through hours of prayer and intercession for the coming election and the U.S.A.! Learn what ‘Spirit Cooking’ is and how to pray against it. The future of democracy in this country is at stake – Will YOU join us in prayer? Stand with With One Accord Ministries as we intercede! PLEASE share this video with others and on your Timeline!

Thank you for watching and reading this disturbing information. Please pray for all of our nations in this perilous end time hour.

Many thanks for taking time to read and share the above post. For similar posts please visit my blog Our Spiritual Quest.

Laura does not get paid for writing in books, magazines or appearing on tv, radio or at events. All of her ministry work is of a voluntary nature.