Celebrities came out in droves to attend the 2018 Met Gala themed, “Heavenly Bodies – Fashion and the Catholic Imagination.” The outrageous event was hosted by Rihanna who was costumed as the pope, other celebrities wore the Catholic theme and mocked Jesus Christ. The event is taking place shortly after a leading Vatican officials trial over sexual abuse charges began in Australia and is a slap in the face to victims of clergy sexual assault according to victim support lawyer Ingrid Irwin. 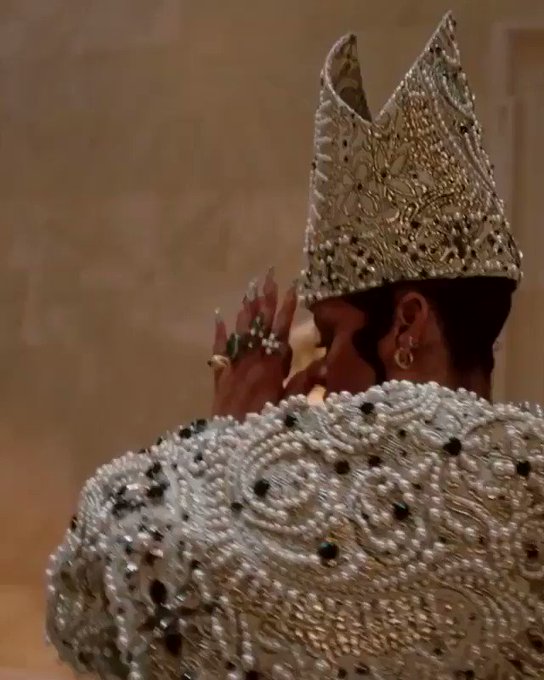 Co-chair Rihanna in Maison Margiela by John Galliano at the ‘Heavenly Bodies: Fashion and the Catholic Imagination’ #MetGala for Vogue. – I

Rihanna dances among statues in Maison Margielas pope attire to the song “Personal Jesus.” The deification of celebrities draws masses of people into idol worship, bowing down at the feet of man instead of worshiping the creator.

“The angels above are singing right now, and you’re a singing angel yourself,” says Liza Koshy as she greets Ariana Grande. Grande explains her Vera Wang dress, “This is the Sistine Chapel back wall, it’s the last judgement scene and it’s where Christ decides who goes to heaven and who goes to hell.”

Katy Perry, who is in a legal battle with a nun, wore angel wings and got on her knees to pose for photographers.

Mocking Christ was beyond evident at the event. People like Madonna who openly go against Christianity wore crosses and viewed exhibits like the one shown above of Jesus on the cross.

News.com.au published and opinion piece prior to the Met Gala advocating for celebrities to boycott the event because, “Survivors of clergy sexual abuse don’t need reminders of the Catholic Church’s outrageous wealth and preoccupation with virgins.” The author Alexandra Carlton explains that this Met Gala will be a celebration of things that will further degrade survivors of sexual assault in the Catholic Church, those things being “its ostentatious wealth and its weird relationship with sex and sexuality.”

“Heavenly Bodies” Met Gala comes at a time that sexual abuse in the Catholic Church is being openly revealed. Carlton continues, “If you’re a victim of clergy sexual assault who is fighting for compensation from a church that regularly cries poor — including the 16,000 Australians who made contact with the Australian Royal Commission into Institutional Responses to Child Sexual Abuse — seeing a bunch of celebrities prance around in the ostentatious and sexually confused fashions of the Church must feel like a slap in the face.”

“Celebrities should be boycotting this ball and giving all the money it would have cost to survivors,” says Ballarat-based victim support lawyer Ingrid Irwin.

Survivors of sexual abuse at the hands of powerful figures within the Catholic Church face an uphill battle to reclaim what was stolen from them in most cases at a very young age.

The charges relate to claims of historical sexual abuse spanning three decades, and include events that allegedly took place at a swimming pool in rural Victoria in the 1970s and at St Patrick’s Cathedral during the 1990s, when Pell served as Archbishop of Melbourne.

In 2012, Australia’s then prime minister, Julia Gillard, ordered a formal inquiry into historical child sexual abuse within Australian institutions, with the Catholic church and its associated organizations coming under particular scrutiny.

The magistrate has called for Pell to face trial. Anne Barrett Doyle, of BishopAccountability.org, a Massachusetts-based online abuse resource, described the magistrate’s decision to make Pell stand trial as “a turning point in the global abuse crisis in the Catholic Church.”

Pell’s trial is likely to be a long spanning process due to the nature of multiple charges coming against him.

“When you stand at the Vatican and look at the enormous cathedrals, the famous galleries, the cloistered world of their privilege, you see the sort of power [child sex abuse survivors] are up against,” Ms Irwin says.

The Met Gala is justifying the sexual abuse says Irwin, “To glorify the Catholic Church in this way is saying that’s okay.”

The statistics published by the Australian Royal Commission are alarming. The following statistics are sourced from the final information update.