Are we alone? UFO’S and Alien beings – A Closer Look – Part One with Norio F. Hayakawa. 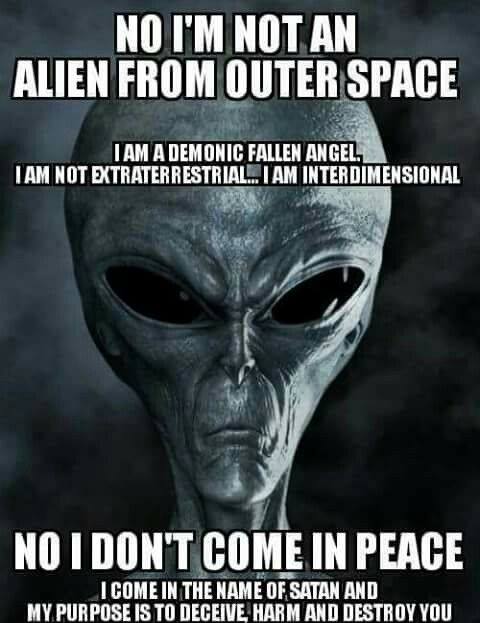 Aliens are Interdimensional not Extraterrestrial

A fascinating topic for scientists and the general public alike. My blog has other articles on this topic as well as radio shows where I interviewed experts or those who contacted or were attacked by aliens.

The Armor of God

10 Finally, be strong in the Lord and in his mighty power. 11 Put on the full armor of God, so that you can take your stand against the devil’s schemes. 12 For our struggle is not against flesh and blood, but against the rulers, against the authorities, against the powers of this dark world and against the spiritual forces of evil in the heavenly realms.13 Therefore put on the full armor of God, so that when the day of evil comes, you may be able to stand your ground, and after you have done everything, to stand. 14 Stand firm then, with the belt of truth buckled around your waist, with the breastplate of righteousness in place, 15 and with your feet fitted with the readiness that comes from the gospel of peace. 16 In addition to all this, take up the shield of faith, with which you can extinguish all the flaming arrows of the evil one. 17 Take the helmet of salvation and the sword of the Spirit, which is the word of God.

18 And pray in the Spirit on all occasions with all kinds of prayers and requests. With this in

Norio F. Hayakawa was a guest on the Coast to Coast radio show with George Noory. He is one of the original Team Members of the world’s largest reality-based online resource on Area 51: http://www.dreamlandresort.com

Norio kindly gave me permission to share a few of his articles here.

The UFO phenomenon as demonic activity? By Norio Hayakawa.

In my opinion, Dr. Jacques Vallee is probably the world’s top-most authority on the nature of the UFO phenomenon.
I totally concur with Dr. Vallee when he stated that “the things we call ‘unidentified flying objects’ may neither be objects nor flying”.
One of the strangest characteristics of this phenomenon seems to be its ability to materialize and dematerialize at will, violating the laws of motion as we know them. 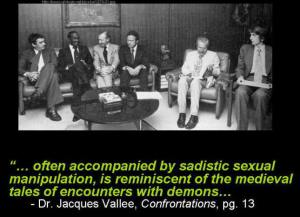 To me, this inevitably leads us to the question:
“Is the UFO phenomenon ‘demonic’ in nature?”

Who are some of the leading UFO researchers who recognize that UFOs are an occultic and/or demonic phenomenon?

“We are dealing with a yet unrecognized level of consciousness, independent of man but closely linked to the earth…. I do not believe anymore that UFOs are simply the spacecraft of some race of extraterrestrial visitors.  This notion is too simplistic to explain their appearance, the frequency of their manifestations through recorded history, and the structure of the information exchanged with them during contact.”

“An impressive parallel can be made between UFO occupants and the popular conceptions of demons.”

“UFOs can project images or fabricated scenes designed to change our belief systems.”

“…human belief… is being controlled and conditioned“. 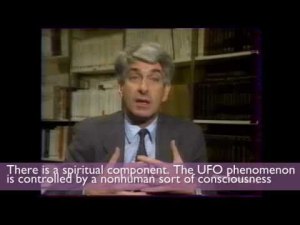 “Man’s concepts are being rearranged” and we may be headed toward “a massive change of human attitudes toward paranormal abilities and extraterrestrial life.”

“The ‘medical examination’ to which abductees are said to be subjected, often accompanied by sadistic sexual manipulation,  is reminiscent of the medieval tales of encounters with demons.

It makes no sense in a sophisticated or technical or biological framework: any intelligent being equipped with the scientific marvels that UFOs possess would be in a position to achieve any of these alleged scientific objectives in a shorter time and with fewer risks.”

“The symbolic display seen by the abductees is identical to the type of initiations ritual or astral voyage that is imbedded in the [occult] traditions of every culture.”

Thus, “the structure of abduction stories is identical to that of occult initiation rituals.”

LYNN E. CATOE, senior bibliographer for a government publication researched by the Library of Congress for the U.S. Air Force Office of Scientific Research: UFOs and Related Subjects:

“A large part of the available UFO literature is closely linked with mysticism and the metaphysical.  It deals with subjects like mental telepathy, automatic writing and invisible entities as well as phenomena like poltergeist [ghost] manifestations and ‘possession.’  Many of the UFO reports now being published in the popular press recount alleged incidents that are strikingly similar to demonic possession and psychic phenomena….” 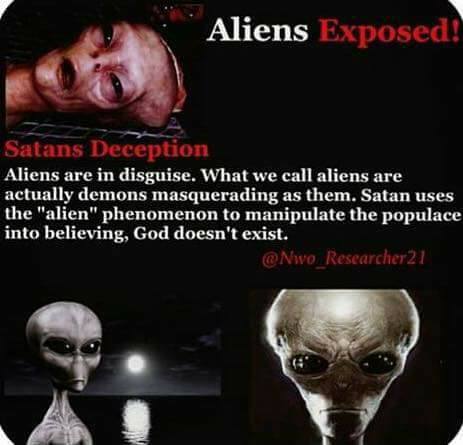 UFO “behavior is more akin to magic than to physics as we know it.”

“…the modern UFOnauts and the demons of past days are probably identical.”

“What is quite certain is that the phenomenon is active here on our planet, and active here as master.”

JOHN A. KEEL, one of the most informed persons in the world on UFOs, author of the now-classic “UFOs: Operation Trojan Horse“:

“The manifestations and occurrences described in this imposing literature on demonology are similar if not entirely identical to the UFO phenomenon itself.”

“The UFO manifestations seem to be, by and large, merely minor variations of the age-old demonological phenomenon.” 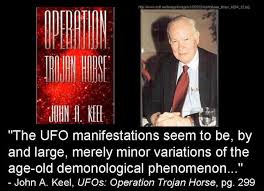 “…if one sets the three occult groups against the three classifications of UFO entities and their characteristics, it is rather surprising how complementary to each other they appear to be, not only through their appearance, activities, and level of behavior, but also in the quality of mental and, especially, emotional reaction and response that has been noted to have occurred on contact.”

“A working knowledge of occult science… is indispensable to UFO investigation.” 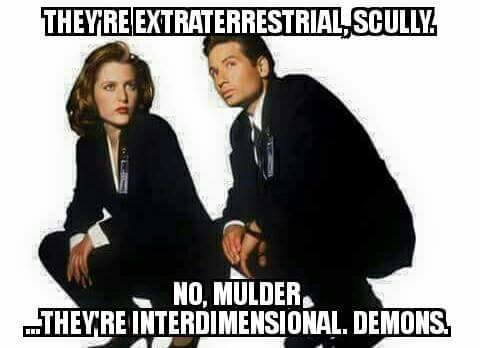 “…studies of flying saucer cults repeatedly show that they are part of a larger occult social world.”

ABOVE, FROM:   John Ankerberg and John Weldon’s

UFOs and other supernatural phenomena

The UFO phenomenon as Demonic Activity  (by Norio Hayakawa) 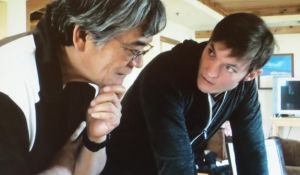 Last but not least is a very important work by Nick Redfern (who is often referrred to as the present-day “John A. Keel”) : 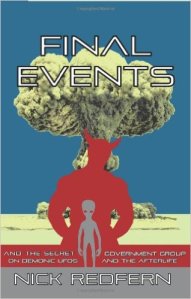 BE SURE TO READ HIS WORK:  FINAL EVENTS and the Secret Government Group on Demonic UFOs and the Afterlife :

“For decades, stories of alien abductions, UFO encounters, flying saucer sightings, and Area 51 have led millions of people to believe that extraterrestrials are secretly among us.  But what if those millions of people are all wrong?  What if the UFO phenomenon has much darker and far more ominous origins?

For four years, UFO authority Nick Redfern has been investigating the strange and terrifying world of a secret group within the U.S. Government known as the Collins Elite.

The group believes that our purported alien visitors are, in reality, deceptive demons and fallen angels.  They are the minions of Satan, who are reaping and enslaving our very souls, and paving the way for Armageddon and Judgment Day.

In FINAL EVENTS you’ll learn about the secret government files on occultists Aleister Crowley and Jack Parsons, and their connections to the UFO mystery; revelations of the demonic link to the famous “UFO crash” at Roswell, New Mexico, in 1947;  the disclosure of government investigations into life-after-death and out-of-body experiences; and an examination of the satanic agenda behind alien abductions.

FINAL EVENTS reveals the stark and horrific truths about UFOs that some in the government would rather keep secret.”

Taken From: The UFO phenomenon as demonic activity?https://noriohayakawa.wordpress.com/2016/02/01/ufo-phenomenon-the-only-viable-interpretation/?wref=pil

To some folks, belief in conspiracies seems to be more comforting than reality (as we understand reality to be).

IS RELIGION PART OF PSEUDOSCIENCE?

Yes, in a way, religion is part of pseudoscience because it involves belief.

I believe there is a God and that he has given to each of us his plan in this life and the life to come.

MORE ABOUT THE AUTHOR OF THESE ARTICLES

Norio F. Hayakawa Resident of Rio Rancho, New Mexico, U.S.A. I was  the Former Director at Civilian Intelligence News Service.  I now support The Federation of American Scientists (FAS) which is the nation’s largest and most well-funded citizens’ watchdog group on government accountability.

I have researched the UFO phenomenon since around 1961.
In 1990 I organized a network called the Civilian Intelligence Network and began to conduct a thorough research on Area 51 in Nevada.

I have also investigated some widespread claims about the existence of Dulce underground base in New Mexico, and have spoken in many conferences nationwide, especially in the early 1990’s.

In 1995 I was invited by a radio talk show host, Art Bell, to appear on his program called “Dreamland“. During my two-hour appearance, I brought out a theme, which was my belief that the government already had enough technologies to simulate a fake “extraterrestrial” invasion or threat scenario in order to create a forced global unity in the future, if necessary.
That was in 1995.

My present research is on why a segment of the population keeps holding on to their “beliefs in UFOs” (as physical alien spacecraft from outer space, piloted or maneuvered by physical alien entities), despite the apparent lack of physical, irrefutable “scientific” evidence.

My focus is also on the study of how a segment of the population’s “beliefs in UFOs” have been manipulated (and in some cases, even created) and taken advantage of by the U.S. intelligence community and by the military in counter intelligence operations, even though (i.e., said with a dosage of healthy skepticism) they themselves may have given the impression of having been perplexed by this enigmatic phenomenon which they cannot explain and thus will not disclose to the public.

I fully support the organization Aerial Phenomena Investigations Team (based in Washington, D.C.) which stated:

“The serious study of UFOs has been suspended for decades.

Although we agree with the mainstream scientific consensus that the evidence for alien visitation is not persuasive, we think there are hints that something unknown may be going on, although judging whether or not that unknown is extraterrestrial is premature at best.”

I shared these thoughts on March 16, 2009 when I was a guest on the Coast to Coast radio show with George Noory.

My gratitude goes to Norio for kindly granting me permission to share a few of his articles here. 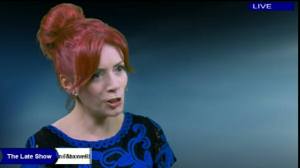