Caleb was a demon worshiper, then a pagan who also practiced wicca and witchcraft. He shares what he used to do on Halloween and also his current opinions of it, now he has found Jesus as his personal Saviour and Lord.

(There’s also a link to his full story here).

What I Did on Halloween When A Demon Worshiper.

For me, when I was a Pagan, I meditated on ‘the dead’ on the night of Samhain/Halloween, to mark the Pagan new year. I did feel a ‘stronger connection’ at this time, but before that, as a Demon Worshiper, things were happening all through the year.

I was fond of drinking blood in a sexual context. My altar when demon worshiping resembled a Witch altar at that time. I was unaware about any books, like-minded people, etc. So, I just went into a world of my own for 3 to 4 years.

For me, Halloween was everyday! Looking back, I can see when things got a grip of me. My mother became a Christian when I was 9.

After going along to church with her, I didn’t feel right then and believe it or not, it was on Halloween I made up my mind not to go back, as my brother dressed me as a Liquorice Allsport.

With a flipper on one foot, a tennis racket in one hand, a baseball glove in the other, wearing shorts, t-shirt and a head band and boot polish. So that night, anxiety and the ‘all eyes are on me’ feeling, put a stop to me going back to church.

Three years later, I went to a Ninpo (ninja) class and at the start they would pray to, I think it was Buddha, if I remember correctly.

Then a few years later, I came across the skull of a goat/ram in my friend’s house! His mother was a ‘good Catholic’ by day and a practising Witch at night! So before too long I was writing spells, poetry, songs …

The moon in phases.

In my past, after a season with demon worship, I became more pagan-minded and worshiped the 8 Sabbats, of which Halloween was an important one. The triple moon god and goddess, which are really just a rehash of Nimrod, Semiramis and Tammuz.

When I gave my heart to the Lord, I was released from the pull of the Occult. Don’t get me wrong, I’ve fell and struggled in many other areas, but by the grace of God this is not one.

The Bible tells us in 2 Corinthians 10 : 5 to take every thought captive, as the devil prowls round waiting to devour you. Also read what 1 peter 5:8 says, and I bear this in mind always :

1 Peter 5:8 … Be alert and of sober mind. Your enemy the devil prowls around like a roaring lion looking for someone to devour.

So, be on your guard on this holiday, especially if your an Ex Occultist, be careful as the enemy is devious.

Nowadays, society makes it seem acceptable to buy your child a Ouija Board and to allow them to fool around with Occult paraphernalia.

But these things and similar are ‘door openers,’ and once that door opens, the foot gets passed the door, then the body (symbolically speaking).

These spirits can lie ‘dormant’ a long time and might only make themselves known now and then.

‘Till you eventually allow them a ‘front row seat’, giving them even more control over your life, and as the scripture says they ‘… come to kill, steal and destroy’. And they don’t act on their own! As Matthew 12 :43-45 says,

When the unclean spirit is gone out of a man, he walketh through dry places, seeking rest, and findeth none. Then he saith, I will return into my house from whence I came out; and when he is come, he findeth it empty, swept, and garnished.  Then goeth he, and taketh with himself seven other spirits more wicked than himself, and they enter in and dwell there: and the last state of that man is worse than the first. Even so shall it be also unto this wicked generation.

To me, the roots of Halloween are a mix of 2 main holidays : Samhain – Lord of the dead, and the feast of Poloma-harvest-/and Fralia departing of the dead. Then the Christian All Hallows Eve and All Souls Day, the dark half of the year, when animals would not survive.

There would be a fire and a feast. On a darker note, a group of Druids going into villages to look for human virgins and animal sacrifices. If none were given to them by the village folks, a hexagram was carved on their door, all the better to appease the Lord of Death. And a soul cake was left for the ‘departed.’ 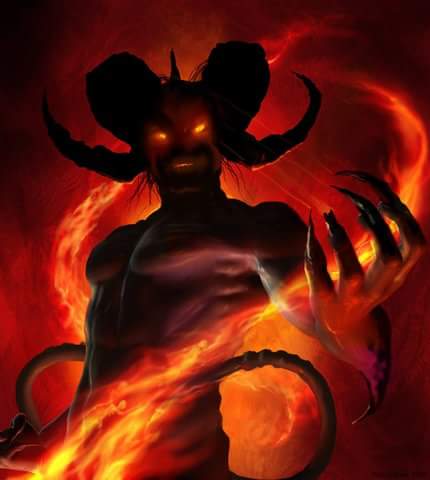 Also, pumpkins were hollowed out, then a light put inside, attempting to ward off evil spirits. With some variations, these are the main accounts that I’ve learned of. Halloween has a lot more going on than what I’ve said here.

Please, be on your guard on this ‘holiday’, especially if your an Ex Occultist, be careful as the enemy is devious.

In my personal opinion, unless you’re called to this work and covered by the blood of the Lamb and walking in His will, suited and booted in His armor, Ephesians 6 : 13-20, treat it as another day.

Because, footholds do start with a tempting thought. Ephesians 5:11, tells us to have no fellowship with the unfruitful works of darkness. Have nothing to do with the works/sin. But don’t reject the worker/sinner, we must show them the love of Christ.

Peter 3-15…  Always be prepared to give an answer to everyone who asks you, to give the reason for the hope that you have. But do this with gentleness and respect …

I don’t even want to think about Halloween at all now, as I will not give him a foothold! I realise though, it’s different if it’s part of your ministry and you’re called to stand as a warrior of God.

Many thanks for reading this and God bless you.

DISCLAIMER: Caleb Keogh is not related in any way to Caleb Dyer!

For similar testimonies, or radio interviews of myself with Ex Satanists/New Agers/Occultists over the years, please see HALLOWEEN
and also SATANIST.

You can see many videos and articles by Ex Occultists and others on a Facebook page – I HATE HALLOWEEN. Please ‘like’ it and join us!

It’s hosted by myself and friends – an Ex Pagan, Ex Medium, Ex Ghost Hunter, Ex Witch and other Ex New Agers and Occultists. There’s over 7,000 ‘likes’. Please join us and help us reach more people with God’s love, truth and powerful liberation from spirits.

Many thanks and God bless you!