ABP. VIGANÒ: POPE MUST GIVE ‘CLEAR STATEMENT’ ON CHRIST’S DIVINITY.

ROME (ChurchMilitant.com) – A whistleblower archbishop wants the Pope himself to respond to a claim that he denies Christ’s divinity.

Ninety-five-year-old Italian journalist Eugenio Scalfari caused shock among Catholics on Wednesday when he attributed to Pope Francis a statement that “Jesus of Nazareth … was not God at all.”

In comments to LifeSiteNews on Thursday, Abp. Carlo Maria Viganò urged the Pope to give a “clear answer” about Scalfari’s claim.

The whistleblower archbishop believes recent statements from Vatican officials are not enough, arguing, “Christians expect a clear answer from the Pope himself. The thing is too important, it is essential; ‘Yes, I believe that Christ is the Son of God made Man, the only Savior and Lord.'”

He went on to say, “All Christians await this clarification from him, not from others, and by virtue of their baptism have the right to have this response.”

Vatican officials have said Scalfari’s recent editorial was inaccurate. On Wednesday, a statement from the Vatican Press Office said, “As has been affirmed in other occasions, the words that Dr. Eugenio Scalfari attributes between quotes to the Holy Father during his colloquies held with him cannot be considered as a faithful account of what was effectively said.”

Likewise, at a Vatican press conference on Thursday, Prefect of the Dicastery for Communications Paolo Ruffini told reporters, “I would like to reiterate that the Holy Father never said what Scalfari wrote that he said.”

But Abp. Viganò says the Pope himself must speak out.

He also remarked, “Why doesn’t the Pope use the language of simple people, while he invites people … to create chaos, confusion and division? Is this the mission of the Pope?”

All Christians await this clarification from him, not from others, and by virtue of their baptism have the right to have this response.Tweet

Scalfari, an atheist, does not use audio recordings or take notes during his meetings with the Pope.

The editorial piece that ginned up this controversy was published Wednesday in La Repubblica. It stated:

Those who have had the chance, as I have had many times, to meet him and speak to him with the greatest cultural confidence, know that Pope Francis conceives Christ as Jesus of Nazareth, a man, not God incarnate. Once incarnated, Jesus ceases to be a God and becomes a man until his death on the cross.

Scalfari’s article alluded to some arguments against Christ’s divinity, adding, “When I happened to discuss these phrases, Pope Francis told me, ‘They are the definite proof that Jesus of Nazareth, once he became a man, even if he was a man of exceptional virtue, was not God at all.'”

The 95-year-old journalist said this was a memory from one of his past conversations with the Pope over the years.

Catholics on social media have been outraged about Scalfari’s alleged quote of the supreme pontiff and disappointed with the responses from Vatican officials.

“This whole mess is of Francis’ making,” Twitter user Sodalitium Pianum opined. “Give an interview to a socialist atheist, who is an ally and reported friend, and this is precisely what everyone feared would happen.”

There really is something disturbing here. They don’t say Scalfari lied or made it up. They call it a free reconstruction? They still sound like they’re playing the same semantic game: “That’s not EXACTLY what he said.”

At the end of today’s #SinodoAmazonico #AmazonSynod Presser; Paolo Ruffini says “the Holy Father never said what Scalfari writes”, in reference to an article by Scalfari which claimed Pope Francis said “Jesus of Nazareth … was man of exceptional virtue, not at all a God.” 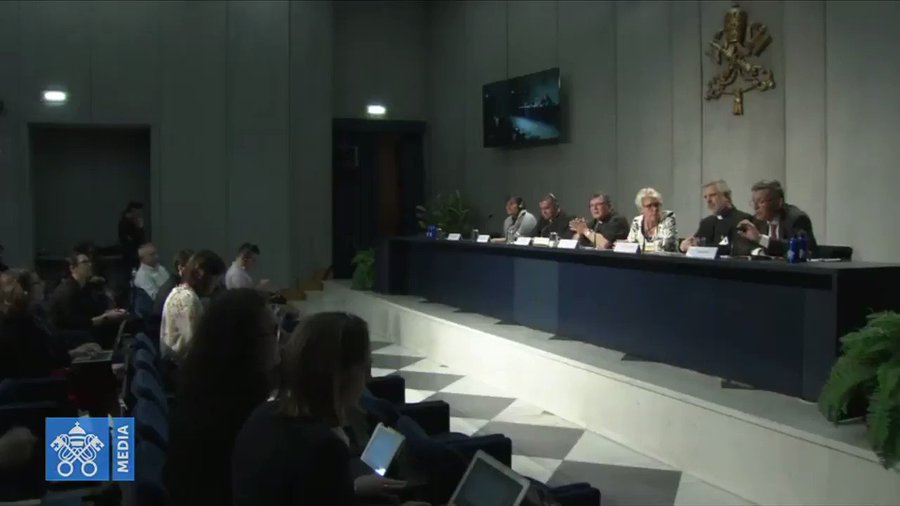 This whole mess is of Francis’ making. Give an interview to a socialist atheist, who is an ally and reported friend, and this is precisely what everyone feared would happen. Did anyone think Scalfari would report that Francis said anything controversially orthodox?

Another Catholic on Twitter referred to Vatican officials’ statements as “a laughable non-denial.”

In the journalism field, Scalfari’s name must be like dirt now, because EVERYONE now knows that he made up and lied about Pope Francis’s words and that he has no journalistic integrity.

Or do I have that wrong?

Actually, the Italians aren’t dumb. They know Scalfari is an atheist who despises religion. The question they have is why Francis keeps meeting with him to chat when he himself know what will come of it. Plus, the Vatican’s response to Scalfari’s article is a laughable non-denial

Some agreed with Abp. Vigano’s call for an official statement from the Pope himself affirming Christ’s Divinity. One person tweeted, “At this stage, nothing less than a formal document issued by Francis himself denying Scalfari’s claims of heresy and explicitly professing the Faith will suffice.”

At this stage, nothing less than a formal document issued by Francis himself denying Scalfari’s claims of heresy and explicitly professing the Faith will suffice. Otherwise I’ve got no good reason to doubt Scalfari’s repeated claims and Francis remains under suspicion. https://t.co/zLWPX6msaO

Throughout Francis’ pontificate, Scalfari has repeatedly published supposed transcripts and quotations from his interviews with the Pope — all without the aid of recording devices or note-taking.

In those articles about his papal interviews, Scalfari has frequently attributed claims to Francis that many faithful Catholics found scandalous, confusing or bizarre.

Back in 2013, just a few months after Francis took the throne of St. Peter, Scalfari quoted him as saying, “Each of us has a vision of good and of evil. We have to encourage people to move towards what they think is good.”

He also attributed to the Pope the claim that “the most serious of the evils that afflict the world these days are youth unemployment and the loneliness of the old.”

During Holy Week in 2018, Scalfari wrote that the Pope believes there is no Hell and souls too wicked to enter Heaven are annihilated. A statement from the Vatican Press Office said this was not a “faithful transcription” of what the Pope said.

Similar statements had been issued in July 2014 and November 2015, in the wake of other papal interview articles by Scalfari.

Speaker | Author | Radio Host. (Ex New Age Spiritualist). From her inside knowledge and experience as an ex new age spiritualist, Laura shares the truth and dangers of New Age, Witchcraft and the Occult, plus their Luciferian, Lucis Trust and UN links to the New World Order's global spiritual agenda. Laura graduated from Strathclyde University with a BA Honors degree in Psychology. She is the founder of international ministry A Spiritual Quest, based in Scotland. For her TV and radio shows, blog, publications, etc, see http://OurSpiritualQuest.com
View all posts by Laura Maxwell →
This entry was posted in Apostasy, Catholic Catechism, Catholicism, Universalism, Whistleblowers and tagged Abp. Carlo Maria Viganò, Eugenio Scalfari, Pope Francis, Roman Catholicism, Vatican. Bookmark the permalink.