Evidence The UN And Lucis Trust Are Linked Through Lucifer-ian Theosophists.

‘There is a plethora of evidence The United Nations was conceived in the minds of  Theosophists, who believe Lucifer is still the light bearer and is the one who unites all religions and will bring peace and unity to earth in its final days.

As you may know, since 2010, I’ve been publicly sharing my inside knowledge as a former New Ager, on The Lucis Trust, its Lucifer worship and so on. Please see the following as part of your own research into the truth of this disturbing fact,’  Laura Maxwell.

You can find web results from a simple search such as:

A publishing company, initially named Lucifer Publishing Company, was … The New York office is located in a building overlooking the United Nations.

Lucis Trust, enjoys “Consultative Status” with the United Nations. It was originally called the Lucifer Publishing Company, is a non-profit trust incorporated … a man of “sufficient stature” to come along, and receive him they will… with open arms.

The Lucis Trust is the publishing arm of The United Nations!

Logo of the United Nations

Blavatsky and the United Nations

Joy Mills wrote an article about “H. P. B. and the U. N.” in 1970, discussing the views of Theosophical Society Founder Helena Petrovna Blavatsky:

To link H. P. B. and the U. N. may seem incongruous. Yet there is certainly a relationship between the goal which she set forth in the re-enunciation of an ageless wisdom concerning man and the efforts to realize that goal in practicality through world order under world law. The alternative is world chaos and world destruction. In May 1889, H. P. B. published in her journal, Lucifer, an analysis of “Our Cycle and the Next,” stating unequivocally: “If Theosophy prevailing in the struggle, its all- embracing philosophy strikes deep root into the minds and hearts of men, if its doctrines of Reincarnation and Karma, in other words, of Hope and Responsibility, find a home in the lives of the new generations, then, indeed, will dawn the day of joy and gladness for all who now suffer and are outcast. For real Theosophy is ALTRUISM, and we cannot repeat it too often. It is brotherly love, mutual help, un-swerving devotion to Truth. If once men do but realize that in these alone can true happiness be found, and never in wealth, possessions, or any selfish gratification, then the dark clouds will roll away, and a new humanity will be born upon the earth. Then, the GOLDEN AGE will be here, indeed…

The Theosophical Society, dedicated from its inception to the ideal of brotherhood, has been called the first United Nations, comprising as it does within its membership individuals of many nations, many cultural and ethnic backgrounds. If we who are its members today, building out of all differences and distinctions a unique harmony of purpose, remain loyal to the vision toward which H. P. B. pointed, it may be our privilege to portray the pattern of a truly universal brotherhood of humanity, founded on the spiritual perception of man’s essential nature. No higher privilege could come to any group of men and women, but the price of brotherhood is paid with the currency of present action, not the promissory notes of tomorrow’s good intentions.[1]

James S. Perkins, President of the Theosophical Society in America from 1945-1960, spoke in a public lecture in 1942 about the need for an international structure:

If the postwar world establishes a federation of free peoples, strong enough to promise the end of military aggression, “we will have a world in which human intelligence will organize and distribute the ample resources of Nature and devote itself to human progress rather than to destruction,” James S. Perkins, vice-president of the Theosophical Society in America, said in a lecture at the society’s rooms here last night.

“But tomorrow’s world,” he cautioned, “will inevitably grow out of today’s acts. Since human progress advances or falls upon the moral and spiritual integrity of the main body of its individuals, the condition of tomorrow’s world rests squarely upon the question whether men in their daily lives are giving expression to those universal principles which are the ethical foundations of any great and enduring world order.”[2] 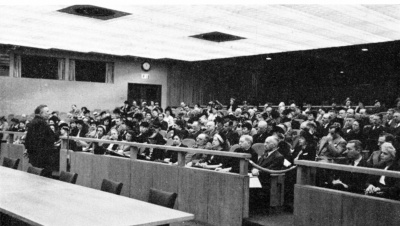 James and Kathrine Perkins of the Theosophical Society in America, at lower right, at United Nations conference for intergovernmental groups

After World War II, James Perkins was appointed by Adyar president C. Jinarājadāsa to be the Theosophical Society’s delegate to the opening conference of international groups, held at Lake Success, New York on February 10-14, 1947. About 250 people attended, representing over 100 organizations. This was one of the earliest sessions establishing the now-huge body of nongovernmental organizations (NGOs) that work with the United Nations on many issues.

The program of meetings was designed to be primarily informational as to the functioning of the Specialized Agencies and Commissions of the Economic and Social Council. There was discussion of ways in which the non-governmental organizations might voluntarily aid in spreading information about the UN. Social opportunities were afforded for the delegates to become acquainted with and to meet informally Mr. Trygve Lie, the Secretary General.

Mrs. Eleanor Roosevelt addressed the delegates at the dinner that closed the sessions.[3] 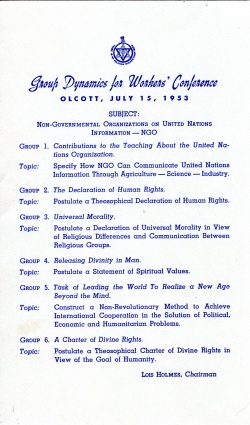 Perkins wrote about the meeting and described how Theosophists could help the UN in communicating its resources and missions:

The principle requisite is to stimulate a direct interest in the activities of the UN by broadcasting information about its programs and needs. A study of this world-wide organization of human energy being applied realistically to the major problems of freeing the world of want and fear cannot fail to arouse our interest and enthusiasm. Once grasped, the integrated pattern of the UN’s various departments and commissions produces a sense of wholeness which is unfortunately lacking in the minds of most people.

Throughout the conference… the need was expressed again and again to inform people of the world in all languages of the character and the operations of the various departments of the UN. Mrs. Perkins and I were impressed with the unique opportunity afforded individual members of The Theosophical Society and the Theosophical Order of Service to serve in this capacity. Lodges or members can initiate programs to distribute information if they will become acquainted with the general set-up of the UN, discovering what information is available and how it may be used.[4]

The international Theosophical Society applied to be accepted as an official non-governmental organization of the U. N., but the application was not accepted. Most NGOs of that era were aid agencies like the International Red Cross, and the TS did not meet the qualification of having practical experience in dealing with massive post-war social problems.[5] Sidney A. Cook, then Vice President of the international Society, explained that:

It would only impede the work of the United Nations Social and Economic Council if its officers and representatives had to concern themselves with voluminous recommendations from those untrained and unskilled in dealing with large-scale economic and social disruption. The problems to be dealt with are practical ones, and only the views and recommendations of those with practical experience in dealing with such problems are desired.[6]

He went on to express regret that “The United Nations has no department or branch to help men realize their spiritual unity; that the approach to all problems is still mainly on the level of physical recuperation only.”[7] His interest in having the Theosophical Society support the United Nations as an NGO continued for some years. On July 15, 1953 the Theosophical Society in America held a conference at its headquarters in Wheaton, Illinois to develop workers who were interested in how the T.S. could work as an NGO for the United Nations.

Involvement of Theosophical Order of Service

The Theosophical Order of Service in Canada has long supported the United Nations:

TOS groups in Canada are encouraged to hold special events in support of the United Nations as a vehicle for global transformation. In Calgary, the local TOS branch has established a yearly tradition of celebrating UN Day in October. The program each year is centered on a particular theme that encourages Theosophists to support UN initiatives for enlightened social action. Afterwards the group enjoys refreshments and ethnic food, with participants bringing a vegetarian dish from a country of their choice. [8]

All groups and individuals who respect the work of Helena Petrovna Blavatsky and her associates are invited to participate in building this wiki into a base of research for serious students everywhere. Our aim is to provide a platform for people interested in Theosophy and the Theosophical Movement to collaborate in assembling information that is accurate, well-documented, and helpful. If you want to contribute creating articles or editing the existing ones contact the administrators, or see the Community Portal for more information.

This Web site is made possible by generous grants from The Kern Foundation and support from the Theosophical Society in America.

Quotes from Spiritualist and New Age leaders that New Age is Satanic.