How To Live The Full Life God Wants For You (2) – Bernie Dymet.

So many Christians believe in the promises of God – they just struggle to live in those promises. That’s because sometimes we expect the promises to be delivered to our front door step – a bit like a pizza. But that’s not how God works.His plan – is for us to take the promises.

In this series – Berni Dymet takes a look at exactly what it means – to take the promised land.

EPISODE ONE: COURAGE IN THE PROMISES.

When the chips are down, when things are against you – gee it can be hard to hang onto the promises of God. Really hard. That’s why He makes promises in a way that – well, puts courage in your heart.

So many things in life promise so much but in the end so many of them fail to deliver and my hunch is that, for many people, it kind of sums up their experience of God.

This Jesus, I mean He promises so much, peace and joy and a life lived in all of it’s abundance but somehow the experience can fall short of the promise. Must have felt a little bit like that for Israel after centuries in slavery and forty years wandering through the desert.

They were about to cross over into the land that God promised Abraham all those centuries before, the Promised Land. But as they looked ahead into that Promised Land what they saw was a whole bunch of tribes and nations already occupying it. There’d have to be battle after battle to take the Promised Land, could this really be one of the promises of God, I mean really?

Well you know, Israel was there, they were on the banks of the Jordan on one side and they were about to cross over into this Promised Land, they’d spent the last forty years wandering through the desert on the exodus. Somehow kind of believing, very imperfectly I might add, of a promise made to Abraham centuries before that God would give this land to Abraham’s descendants.

And here they were, Israel, Abraham’s descendants, and they looked across the river and they saw all these people and tribes and kings and fortified cities and armies. On the one hand they wanted to believe in God’s promise but on the other hand they’re looking at the reality thinking, “wow, how is that ever going to happen?”

You know God calls us to His Promised Land here and now today. It promises all the way through the Bible about a relationship with God. Jesus says in John chapter 10, verse 10, he says:

The thief you know only comes to steal, kill and destroy but I’ve come that you might have life in all its abundance.

Well think about that for a minute. Look at our lives and look around at what’s going on, can we have a really abundant life? Again, Jesus says in Matthew chapter 13, he says:

The kingdom of God is like a treasure hidden in a field. When a man found it he hid it again and in his joy he went and sold all that he had to buy that field.

Wow, you know God’s kingdom, God’s Promised Land is like … well it’s like a treasure. When we give our lives to Jesus lock, stock and barrel He invites us into a land of promises and they’re promises so different to what the world promises. You see His Promised Land isn’t a physical land or physical wealth and all that other stuff, it’s quite different. Once He was asked by some religious leaders of the day, when this Kingdom of God would come and Jesus said:

The Kingdom of God doesn’t come with your careful observation. People won’t say ‘Oh here it is or there it is’. No, he said, the kingdom of God is within you.

The Promised Land isn’t something out there, it’s not a new house or a new car or a new job. The Promised Land, the Kingdom of God is in our hearts. And so often we feel like Joshua, standing on the threshold looking back at what’s been and looking forward and wanting to believe the promises of God but you look around and some days they’re so hard to believe.

I want to talk right now about taking courage in the promises of God. This is so important because you know what we do, you and I, we focus on the things we can see. We focus on the broken relationships or the lack of money or all the problems we have in our lives and we think, “Oh, I don’t think God’s promises can ever come”. But God calls us to set our eyes on the things that are above, to set our eyes on heavenly things. Look again at what God said to Joshua about His Promised Land:

I have given you every place where you will set your foot as I promised to Moses.

Isn’t it interesting. He uses the past tense, actually it’s the Hebrew perfect tense, “something that is done and completed”. “I have given you every place where you will set your foot …” As far as God was concerned the Promised Land was a done deal, it was given and when God gives, no-one can block that. That’s God’s perspective. And yet our perspective is to focus on all the obstacles and the enemies and the fears and the doubts and the problems.

Can I tell you something? When I became a Christian about 15 years ago I had so much dysfunction in my life I can’t begin to tell you. And one of the first promises of God that I heard was that one we talked about before in John chapter 10, verse 10 where Jesus said:

I have come that you may have life in all its fullness and its abundance.

It’s a promise that He wrote on my heart and somehow I just decided to believe it like a child. Jesus came because He wants me to have an abundant life. Now if I looked at me and my life and the predicaments and all the pain and the trouble I was in, I had no right to believe that promise from Jesus but somehow God’s word, well the Holy Spirit comes along and it’s like a gift. He lifts our eyes up to see heavenly things.

And I believed in that promise so imperfectly and I had to go through some things. And I was afraid some days and I was lonely some days and some days I wanted to give up. But at the end of the day I decided to believe.

What Jesus did for you and me on the cross was to remove all the sin, all the reproach of the past and open up a door into an abundant, outrageous and wonderful relationship with God. It is a done deal, past completed, it is finished.

The abundant life has been purchased for us on that cross and now, now’s time to walk in it and the point of what God said to Joshua was that there will be battles:

I’ve given you every place where you will set your foot as I promised Moses. No-one will be able to stand up against you all the days of your life because as I was with Moses so I will be with you. I’ll never leave you or forsake you.

For me and my life over these last dozen and a half or so years and every day here and now, the courage I have to face the people and the obstacles are the promises of God. Because when God promises something nobody, but nobody can take it away. The focus of the promise is our relationship with God, the peace and the joy that flows from that.

All the other stuff, the relationships and the health and the money, all that’s temporary, that will come and go but what will last forever is our relationship with God through Jesus Christ. And it’s an act of faith to take courage in the promises of God. Because when God promises something, when Jesus says, “I have come for you to have an abundant life in all it’s fullness”, you know something that’s a promise and we lay hold of that promise through faith by believing in the word of God. 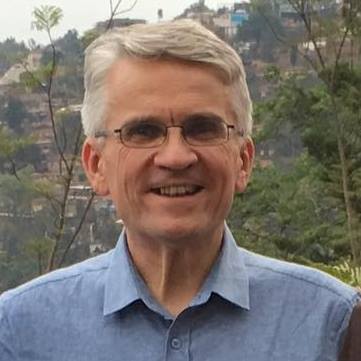 ‘If you yearn to live a life of meaning and purpose, joy and peace, then Christianityworks is for you: full of life-changing, practical Bible teaching to help you live out the victory that you already have, in Jesus Christ. Taking you deeper into God’s Word and Closer to Jesus. Delivered to your inbox daily.’ Bernie Dymet.

Read above article or listen to the audio version online at christianityworks.co.uk

Speaker | Author | Radio Host. (Ex New Age Spiritualist). From her inside knowledge and experience as an ex new age spiritualist, Laura shares the truth and dangers of New Age, Witchcraft and the Occult, plus their Luciferian, Lucis Trust and UN links to the New World Order's global spiritual agenda. Laura graduated from Strathclyde University with a BA Honors degree in Psychology. She is the founder of international ministry A Spiritual Quest, based in Scotland. For her TV and radio shows, blog, publications, etc, see http://OurSpiritualQuest.com
View all posts by Laura Maxwell →
This entry was posted in Apologetics, Bible Devotional Readings, Guest Articles, Online Article and tagged A Different Perspective, Berni Dymet, Bible, Bible readings, christianityworks.co.uk, Daily Bible Reading. Bookmark the permalink.

3 Responses to How To Live The Full Life God Wants For You (2) – Bernie Dymet.