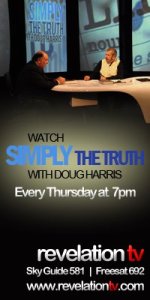 As most of you will know, our beloved brother Doug Harris, went to be with the Lord Jesus on Friday 17th May, at 9am.

Our dear, mutual friend & co-host of Doug, Pastor Michael Cummins shares a few words of tribute of Doug, TONITE, Thurs 30th May, on his show ‘Voice In The Wilderness’, from Midnight until 2am, London UK Time.

Please keep him in prayer for tonight. (Photo of them both on one of Doug’s show’s).

I first met them both in 2009 and also saw them together several times, so I know how very fond of Doug, Michael was. So plz pray for him, as he prepares to share his tribute of Doug, on his show tonite, ‘Voice In The Wilderness’ at midnight.

Doug in the studio, Revelation TV.

In recent weeks as you may know, Michael visited Doug every Thursday morning to pray for him, then he prayed for him live on his late show every Thursday evening too. He was with him that final Thursday, the day before he went to be with Jesus in glory. Today will be the 2nd Thursday Michael has not visited Doug.

Thanks to those of you who are patiently waiting for my own tribute for Doug. I wanted to wait until after I’d been to Doug’s funeral, which was this Tuesday. Quite frankly, I couldn’t have made a YouTube Tribute video yet, as I’ve been too upset.

My heartfelt prayers are for Doug’s wife Noemi and their lovely family. Also, my appreciation to Doug’s family, Revelation TV staff and Michael Cummins for welcoming me to Doug’s beautiful funeral.

My gratitude also goes to Pastor Michael Cummins and Jenice for inviting me to stay at their home the nights before and after Doug’s funeral, for your love, prayers and kindness. God bless you both and your ministry.

Thanx so much. God bless you.

Speaker | Author | Radio Host. (Ex New Age Spiritualist). From her inside knowledge and experience as an ex new age spiritualist, Laura shares the truth and dangers of New Age, Witchcraft and the Occult, plus their Luciferian, Lucis Trust and UN links to the New World Order's global spiritual agenda. Laura graduated from Strathclyde University with a BA Honors degree in Psychology. She is the founder of international ministry A Spiritual Quest, based in Scotland. For her TV and radio shows, blog, publications, etc, see http://OurSpiritualQuest.com
View all posts by Laura Maxwell →
This entry was posted in TV Programs and tagged 'Voice In The Wilderness', Doug Harris, Michael Cummins. Bookmark the permalink.