No Condemnation by Doug Harris. 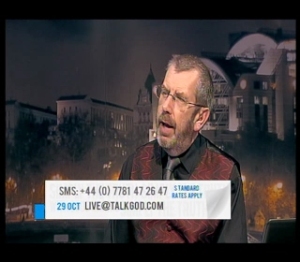 Doug Harris, as seen on Revelation TV. I saw this post of Doug’s and wanted to share it. For more of Doug’s posts, plz see his blog at http://simplydoug.com/

No Condemnation by Doug Harris.

“Romans 8 verse 1 gives Christians a wonderful promise, “Therefore there is now no condemnation for those who are in Christ Jesus” We can live in that promise and see its effects in our lives every day. However, the question I would like to ask is do we pass on these benefits to others, especially to those who have not as yet come into the fullness of the promise?

First, what does the word actually mean? It comes from a root Greek word meaning ‘to judge against’ and can be translated as an ‘adverse sentence’. If we are condemned we have an adverse sentence against us that could be on our record for the rest of our lives. As we are justified in Christ there is no ‘adverse judgement’.

Just think for a minute then, if God does not condemn our brothers and sisters and we do, we are going against the living Word of God. There is such a difference between reaching out to correct someone in love and condemning them with an ‘adverse judgement’. I guess it really comes down to the attitude we hold when sharing and speaking words. Do we really want to hurt them or win them by what we say and do? Do we want to uncover their sin and wrong for all to see or cover it in Christ so they can deal with it?

How did Jesus treat people when He met them – those who were not his yet – did He call them an adulterer/ess or a liar or a cheat? No! To the one who was still in that state He showed amazing love and grace and ensured He did not give an ‘adverse judgement’. Indeed John 3:17 clear says He did not come to do that.

John 4 is the most amazing testimony to this fact and is a perfect illustration as to how we should treat non-Christians. I will share just a few thoughts here but go through and look at the chapter yourself and see what

Verses 10 – 14 – Jesus does not even begin by talking about the woman and what she has so obviously done wrong but He talks about Himself. He shows her that what He has is far better than what she has. The moment someone sees there is something better they are ready to leave what they have for the better! But if they are enjoying what they have and see no more than that – why should they leave? Yet when they see there is something so much better that they can have they begin to consider the possibility. That is the picture we need to paint – not how black and awful is their sin but how great and magnificent is the one who died to set them free from that and give them a live much more abundant.

Verse 15 – This leads the woman to want what Jesus has rather than being forced away. No, she did not understand exactly what Jesus was saying, but she knew it was better and she would be delivered from the humdrum awful life she was in.

Verses 16-18 – Jesus still has to deal with what is wrong in the woman’s life but He does it in such a loving way. He begins with a question, not an accusation. It is far better to ask a question that will cause the person to open up to you rather than an accusation that could cause them to clam up.

Verse 29 – She knows that something is different. When she left in the morning she did not want to talk about her past life but now she was prepared to shout it from the rooftops. She saw her past sinful life in a whole new light because the love and grace of Christ had touched her. She is not absolutely sure what it is but now there is a big ‘?’ in her life. Could this be?

Let’s share the love of Christ and the grace of Christ and allow that to minister to people who do not know Him and let’s treat one another in the same way.”

For more of Doug’s posts, plz see his blog at http://simplydoug.com/

Speaker | Author | Radio Host. (Ex New Age Spiritualist). From her inside knowledge and experience as an ex new age spiritualist, Laura shares the truth and dangers of New Age, Witchcraft and the Occult, plus their Luciferian, Lucis Trust and UN links to the New World Order's global spiritual agenda. Laura graduated from Strathclyde University with a BA Honors degree in Psychology. She is the founder of international ministry A Spiritual Quest, based in Scotland. For her TV and radio shows, blog, publications, etc, see http://OurSpiritualQuest.com
View all posts by Laura Maxwell →
This entry was posted in Uncategorized and tagged Dont accuse, Dont judge, Doug Harris, Grace. Bookmark the permalink.