On Thursday 5th March at 10pm, London Time, a 30 minute extract from the 2 hour film, Sister Religions will be shown on Revelation TV.

You can watch it online at those times on www.revelationtv.com

‘As a battle of ideologies rages across the Middle East, with Islamic State and others causing a dramatic increase in persecution of our Christian brothers and sisters, many people are asking the question : are Judaism, Christianity and Islam ‘Sister Religions’?

Do Muslims and Christians really worship the same God? Are Judaism, Christianity and Islam ‘Sister Religions’? A simple question or maybe not. Which do you choose to accept?

I agree these three faiths are not sister religions! I believe the advert is worded that way, giving a question, to pique folks’ interests to perhaps watch the program.

In the midst of continuing conflict in the Middle East, a new resource, featuring groundbreaking interviews with Bishop Michael Nazir-Ali, Rev’d Dr Mark Durie and Elizabeth Kendal, explores the relationship between Christianity, Judaism and Islam.

In this groundbreaking series of interviews, three religious experts reveal the truth. How should Christians respond to the challenge of Islam? What can be learned from both history and current events? The answers will surprise you.’

Here is a 90 second trailer.

“One of the greatest barriers to effective religious engagement is ignorance and lack of knowledge. These videos go a long way to helping Christians effectively understand the relationship between the world’s two biggest religions. They are both informative and timely.” 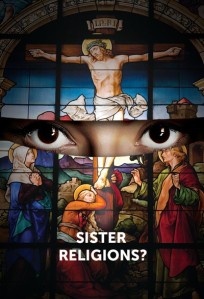 The two hour DVD Sister Religions is also available to order for £9.99 from ChristianConcern.com