The Pope’s Revolution by Panorama, on BBC1 TV.

Having watched these documentary programs on TV recently, I decided to upload them to my channel on YouTube. (Please see below). You might find them interesting.

Understandably, due to copyright issues, YouTube blocked my upload of this video. However, you can also watch the below documentary on I-Player http://www.bbc.co.uk/iplayer/search?q=The%20Pope%27s%20Revolution

Please see the second program below. It’s been uploaded in four parts.

Secrets of The Vatican, was first televised by CH4, on Tues 25th March 2014 at 11pm. This was Series 1, Episode 1. Please watch the coming episodes on the below link!

Understandably, due to copyright issues, YouTube blocked my upload of this video. However, you can also watch the below documentary on this link to CH4. http://www.channel4.com/programmes/secrets-of-the-vatican/4od 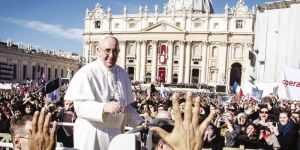 “Crime, corruption and cover-up: this is the epic story of the collapse of the Benedict papacy. Can Pope Francis defeat the forces that overwhelmed his predecessor?

Secrets of the Vatican tells the epic story of the collapse of the Benedict papacy and illuminates the extraordinary challenges facing Pope Francis as he tries to root out corruption and chart a new course for the troubled Catholic Church and its 1.2 billion followers.

It tells a story of crime, corruption and cover-up at the heart of the Catholic Church, with political intrigue, allegations of financial corruption and sexual hypocrisy laid bare through first-hand testimony from those who were close to the scandals, or who are helping Pope Francis reform the Church.

The Church was already mired in the child sex abuse scandal when Benedict became Pope; a scandal that would dominate his papacy.

More scandal was to come from other quarters, involving allegations of money-laundering through the Vatican bank, and corruption inside Vatican departments.

As the aging Pope’s health deteriorated he was hit by a string of damaging news stories, including the release of undercover footage of gay sex parties in Rome attended by priests.

The final straw came when his butler leaked thousands of private documents to the press, exposing the inner workings of the Church and revealing power struggles within the Vatican itself.

In his first year as Pope, Francis dramatically changed the message coming from Rome. But can he defeat the forces that overwhelmed his predecessor?”

In the coming weeks, you can watch the next episodes on this link to CH4.

Speaker | Author | Radio Host. (Ex New Age Spiritualist). From her inside knowledge and experience as an ex new age spiritualist, Laura shares the truth and dangers of New Age, Witchcraft and the Occult, plus their Luciferian, Lucis Trust and UN links to the New World Order's global spiritual agenda. Laura graduated from Strathclyde University with a BA Honors degree in Psychology. She is the founder of international ministry A Spiritual Quest, based in Scotland. For her TV and radio shows, blog, publications, etc, see http://OurSpiritualQuest.com
View all posts by Laura Maxwell, BA (Hons). →
This entry was posted in Catholicism, TV Programs and tagged BBC1, Catholic, CH4, charismatic Catholic, Panorama, Pope Francis, Roman Catholicism, The Benedict papacy, the Catholic Church, The Pope's Revolution, The Vatican Bank, Vatican. Bookmark the permalink.

2 Responses to The Pope’s Revolution by Panorama, on BBC1 TV.