Witchcraft Moves Mainstream As Christianity Declines: And Has Trump In Its Sights – The Telegraph. 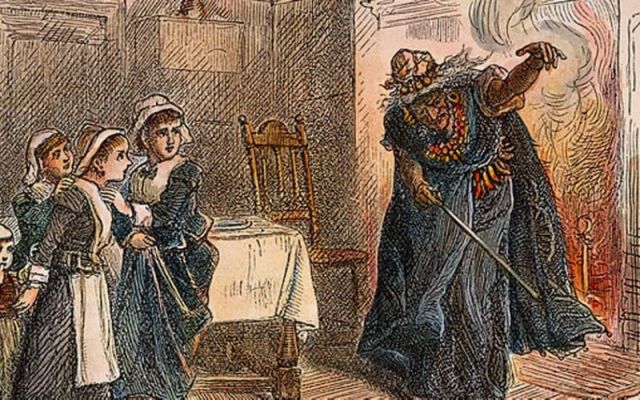 Witchcraft is thriving in the US, with an estimated 1.5 million Americans now identifying as witches – more than the total number of Presbyterians. As Christianity declines across the country, paganism has swung to the mainstream, with witchcraft paraphernalia for sale on every high street and practises normalised across popular culture. In the past two years, it has also become darkly politicised.

Dakota Bracciale, a 29-year-old transgender/queer witch and co-owner of Catland Books and witch shop in Brooklyn, is pleased with the outcome of the ritual hex placed on US Supreme Court Justice Brett Kavanaugh in October. The curse, carried out from Catland Books, was well attended by witches, atheists ad humanists – and was followed around the country on social media.

Millennials, says Bracciale, are looking for spiritualism outside traditional religion. “The hex centres on the notion that we live in a universe of chaos, entropy, destruction, death, decay with a final ending of oblivion – scientists are telling us. So the witch does everything for themselves – there is no other help in this universe of decay and chaos. If you don’t get in the driver’s seat things will just get worse,” the witch said.

In a wide-ranging discussion with the Telegraph, Bracciale, who described the interview questions as “sensationalist”, talked about political hexes and witchcraft in general.

Bracciale is “absolutely” willing to cause physical harm through a hex – “no issue with that”. And while Bracciale would have been just as pleased with the new Supreme Court Justice’s death, resignation or physical disfigurement, the main goal of the Kavanaugh hex, and the three hexes on President Donald Trump from Catland Books this summer, was to “let them be exposed for who they are – especially as impotent men”. The curse began with a recitation of the Biblical scripture Psalm 109: 8: “let his days be few, let another take his office.”

Catland Books is replete with Christian images including the Archangel Michael, Christian defender against the demonic, and the Virgin Mary. Bracciale, a self-described sexual abuse survivor, who grew up in a born-again-Christian evangelical cult in Arizona, takes umbrage at the notion that witchcraft and Christianity are mutually exclusive. Witchcraft “has a ton of roots in Christianity”, the Brooklyn witch says. Indeed, in Bracciale’s view, the Bible is a spell book, particularly the Book of Psalms.

Witchcraft is powerful, according to Bracciale, because of the “intersectionality of feminism, sexuality, gender, the fight for freedom, eschewing the patriarchy and having sort of a vitriolic response towards it”.

US justice department memos were leaked to the press shortly after the Kavanaugh hex exposing potential attacks on transgender Americans’ rights – signalling a successful hex for Bracciale. The witch also believes that the Catland hexes on Mr Trump helped facilitate the myriad woes the US president has experienced in the past six months.

Bracciale hopes that hexes or curses will be used more frequently in politics in the future.

Careful to point out that “witchcraft is not a religion, it’s not a belief system, it’s not an ideology, it’s a practice,” this witch “has no time for Wicca”, a religion that went public in 1954.

In the confusing, loosely defined but growing world of witchcraft in America, many millennial witches may disagree with Bracciale’s views.

Three religious surveys from Trinity College in Connecticut concluded that the practice of Wicca witchcraft has increased continuously between 1990 and 2008 in the US.

That growth trend was confirmed by the Pew Research Center in 2014, whose surveys reported that more Americans identify as Wiccan, a form of modern paganism created in England, or pagan than as Presbyterian. At the time of the surveys, there were 1.4 million American Presbyterians and about 1.5 million Wiccans.

In addition to political protest theatre, the American beauty industry now caters to the phenomenon referred to as the “witch aesthetic”.

GOOP, the $250 million lifestyle company founded by the actress Gwyneth Paltrow, is not lacking for customers who are interested in the mystical side of the wellness industry that pushes the use of crystals, tarot cards, and astrology. The mainstream Nordstrom Department Store collaborated with the wellness crystal company Goldirocks to release a limited edition crystal set.

So, it may have surprised San Francisco-based Pinrose, an online fragrance retailer, when negative feedback from practicing witches persuaded them to cancel their launch of a Starter Witch Kit at cosmetics giant Sephora this October. The nine-piece set which would have retailed for $42 included fragrances as well as tarot cards, sage, and a rose quartz crystal.

Chelsea “The Sky is Falling!” Little@_chelsearedd

Witchcraft or Paganism (or however you refer to it) is a religion. One with actual practices and guidelines. It is not a basic bitch bandwagon. Spirituality is not a toy. Don’t buy the #witchkit @sephora is selling.

Being a witch isn’t trendy, it isn’t cool because Halloween is next month, it doesn’t make you quirky or creepy. Being a witch is a choice, and practicing is a form of religious worship. Do your research, and protect yourself when you practice. Always. & Don’t buy a #witchkit.

In September, Pinrose “profoundly” apologised to the witches via a statement on its website:

“First and foremost, to those who have shared their disappointment or taken offense to this product, we apologise profoundly. This was not our intent. We thank you for communicating with us and expressing your feelings. We hear you; we will not be manufacturing or making this product available for sale.”

What do you think of the “Starter Witch Kit” from @pinrose? A gimmick to sell perfume, appropriation from #Native people’s sacred practice, “fluffy bunnies” as Willow might say, or theft and profit from indigenous culture? Do you think @Sephora should CARRY it or CANCEL it?

All occult practitioners are not witches. Ellen Bourn has worked in the medium and psychic arena for forty years. She says she became aware of her ability to communicate with spirits at age eight and joined a spiritualist church when she was at college.

“I joined a Spiritualist church while attending college and began training with their spiritual development classes,” she said. “We were taught both mediumship and spiritual healing. One of the beliefs of the religion of spiritualism is that communication with all planes of reality is possible. I also read some of Sir Arthur Conan Doyle’s material on the same subject. I later elected to become a psychiatric nurse to further allow me to study more about neurology in an attempt to study mediumship from both a religious and scientific perspective.”

Ms Bourn is a former president of The Lilly Dale Assembly, the world’s largest community of spiritualists. She does not practice witchcraft. Witchcraft is not allowed at Lilly Dale and alleged witches are not permitted to live in the village of Lilly Dale. Ms Bourn distinguishes her work thus:

“Witchcraft is a different belief system than Spiritualism. The term witchcraft has been used to mean those who participate in the religions of paganism, satanism, and gaiaism. There have been times when I have been referred to as a ‘witch’. Some have said this as a joke, others as an insulting remark. Fear is usually the basis of these negative remarks.”

Ms Bourn is skeptical of the current American witch aesthetic. She notes that the concept of being a female witch has been “ultra-sexualised by the media and marketed as an appealing and alluring look”.

“Appearing witch-like might confer the concept of special powers of intensity, mystery and sexuality to the woman who selects this as her style,” Ms Bourn says. But in addition to men who are attracted to the witch look, women put themselves at risk of also attracting negative entities.

“Although this is not an intentional outcome,” Ms Bourn explains, “it occurs because one is potentially drawing upon the black arts without realising it. Black magic is very dangerous as it removes a person’s free will [to do the bidding of another]. This can be viewed as a violation of the soul’s purpose. This can be damaging to both the women and the gentlemen [the witch] may attract. Some sexual practices may lead to negative outcomes in a similar manner.”

In regard to the Starter Witches Kit, Ms Bourn cautioned against improper use of sage, meant to be a cleanser and rose quartz crystals, which deal with a person’s romantic emotions. When used improperly, Ms Bourn says, a person can draw to themselves manipulative and dangerous people.

The psychic services industry in which Ms Bourn works has grown steadily over the past five years with a 2018 projected US market value of $2.2 billion, according to industry analysis firm IBIS World.

The growth of witchcraft among millennials, aged 22 to 37 in 2018, coincides with a decline in Christianity in the US. Some Christian commentators and clergy have expressed alarm at how occult activity and symbols are now mainstreamed into US popular culture and considered morally neutral. But there is agreement that witchcraft and other occult practices seem to provide a spiritual experience for people no longer drawn to religion.

In an interview with the Christian Post, Wanda Alger, a pastor at Crossroads Community Church in Winchester, Virginia, said:

“The sad thing is that these millennials who are exploring the dark side of the supernatural have more faith and belief than most Christians. Because they are open and spiritually hungry, the spirit realm responds. The biggest hindrance to understanding the realities of the Spirit realm is unbelief.”

Ah, Yahoo news. It’s like the Onion but the writers don’t know they write comedy.
Replies 125

So you say there are 1.5 million witches, and this is more than the number of people who identify as Presbyterians; you do realize that there are many other Christian denominations besides Presbyterian, right? Not to mention Catholics? I mean talk about a skewed article. There are still many more Christians than witches in the U.S.
Replies 1253

Witchcraft On The Rise As Christianity Declines by Ray Gano of PZTV.

2 Responses to Witchcraft Moves Mainstream As Christianity Declines: And Has Trump In Its Sights – The Telegraph.